The Path to Independence might be through Teens to Teens Talk on Social Media.

Mr. Chris Black, Dean of the Marketing Department at Abaarso University was interviewed last week on the TV, we had the opportunity to talk to him this morning. Mr Black has been with us for the last 7 years and he is married with the daughter of the Minister of Trade. His ideas can help our country gain independence.

I asked some questions and Mr. Black was very helpful.
I started, Professor what do you do? Mr. Black said, “I teach for the last seven years at our University and before that I use to work as a East Africa Director of Toyota.”, he went on, “Here in Somaliland, I teach Marketing and I have PhD in Marketing from Illinois State University, presently I’m the dean of the Marketing department.” How many years have you been teaching marketing Professor? “On and off I have been teaching and working on Marketing for the last 25 years.”

Why you think Marketing can help Somaliland gain independence from Somalia? “Somaliland is a quasi independent country, in the sense that it separated from Somalia nearly 30 years ago after a terrible civil war. But it is not officially recognized as an independent country, this harms the all population, lack of recognition means little investment, and unemployment specially for the young, my students…This unfortunate refusal to abide by the self determination of the people of Somaliland is mainly due that Somalia it against the recognition of the independence, although Somalia is a failed state with daily terrorists attacks, the African Union will not recognize a new state if the Somalia will not accept it. So we have to work with the young people of Somalia.” And what can be done sir? “Well they see Somaliland as part of their country although that was the case for just a few years after Somaliland united with Somalia after independence from the United Kingdom. This refusal to understand that the people of Somaliland have no interest of been part of their country which caused thousands of dead and a near genocide during the civil war. Now if we use social media and we know that most young people in Somalia are social media addicted, we can influence this demographic group which is vast, because most of the population are under 45 years old in Somalia.”

What would be necessary to realize your idea Professor? How can we use Marketing to help this issues? Mr. Black seems enthusiastic, and ready to tell us more, “Well with a good social media campaign in Facebook explaining the issue will help perhaps realize the independence dream, we could really influence the younger population in Somalia to accept the inevitable independence of Somaliland.” I interceded, how much it would cost to implement your plan? “But that is the beauty of Marketing, Social media on Facebook is very cheap, we with a few thousand dollars would reach millions of active social media users.” he said. Will use our university students to work on your project, I asked, “Yes, we are working with the Ministry of Foreign Affairs to help us in terms of a budget and guidance, but to reach the young people in Mogadishu we need the young people in Hargeisa.”

Could it be dangerous? Our friends in Mogadishu, will not be happy with anything which might threaten their sovereignty, but Mr Black had a ready answer, “Well not really, Somaliland is free of Al-shabab, and it is 20 years since the last terrorist action, we can keep the country safe, so I don’t see this as dangerous for our students or for the people who will work on posting on the social media about this issues.”

We also had the opportunity to talk to one of the students, Abdul Isaac, a third year student in the Software Engineering, “Abdul how many hours do you spend on social media daily?” which he answered that, because, the work load his course has increased, he now spends only two or three hours a day, before while due to the Covid19 the school was closed he use to spend many hours more, when I asked him what does think of posting on Facebook to interact with Somalis in Mogadishu, “if it is to help my country I’m more then ready” he replied quickly.

Mr Black also shared the news that he is having a meeting this next Friday with the Ministry of External Affairs to talk about his project, and he added some more information which is below, information he is sharing with the Minister.

Numbers of Facebook users in South Africa, from 2017 and anticipated to 2025, we can assume the same number for the rest of Africa. 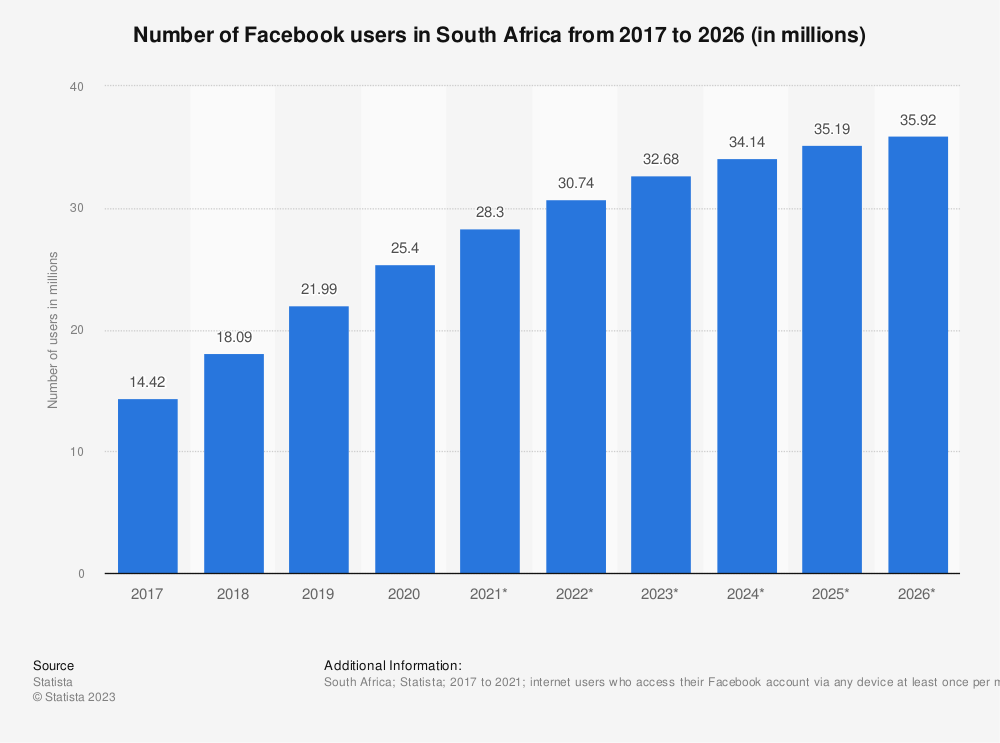 As at the 11th of March 2020, there are more than 210 million active Facebook users in Africa.

This number has grown by 41% since 2017, and it makes up 16% of the continent’s total population of 1.3 billion people. Read more at https://enitiate.solutions/africas-top-10-countries-contribute-a-combined-76-to-the-continents-facebook-active-users/

The map below shows the top 10 countries by active Facebook users.